Asia Cup: Asia Cup is a prestigious tournament in the world of cricket which started from 1984. The first edition of this tournament was held in UAE under the name Rothmans Asia Cup. Since then this tournament has been organized 14 times till 2018. Indian team is the most successful team which has won its title 7 times. Apart from this, Sri Lanka has won the Asia Cup trophy five times and Pakistan twice. At the same time, the upcoming 2022 session is to start in the UAE from 27 August.

If we talk about the best batsmen and bowlers of the Asia Cup so far, Sri Lanka has dominated in both the departments. At the same time, no Indian bowler is included in the top-5 bowlers. Irfan Pathan is in sixth place with 22 wickets. He is followed by Ravindra Jadeja (19 wickets) at 9th and Sachin Tendulkar (17 wickets) at 13th. However, Sachin Tendulkar and Rohit Sharma are present in the top-5 batsmen. Virat Kohli is at the sixth position with 766 runs. 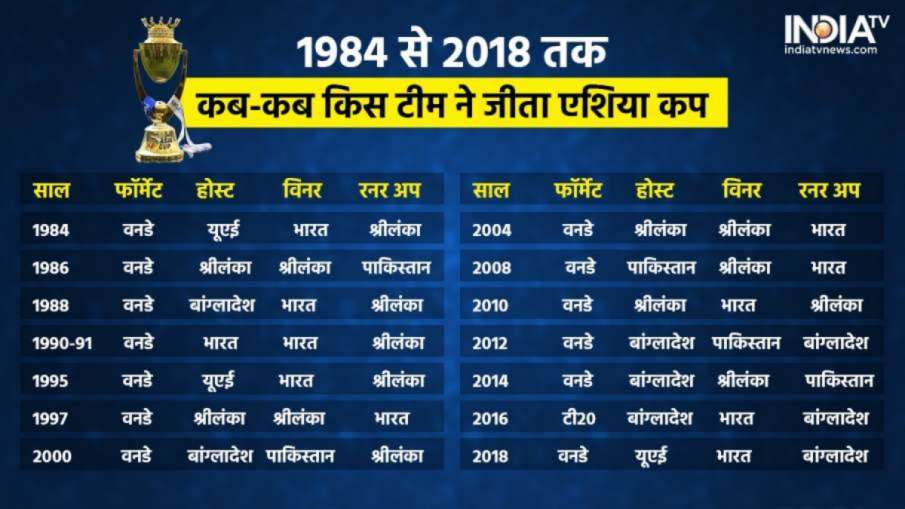 All the winners of Asia Cup so far

Top 5 bowlers with most wickets

Top 5 batsmen with most runs

Let us tell you that the cricket playing nations of the Asian continent participate in the Asia Cup. India, Sri Lanka, Pakistan and Bangladesh are the major teams in this event. After this, the team of Afghanistan is also a part of this tournament for the last few years. Apart from this, the team of UAE in 2004 and 2008 and Hong Kong in 2004, 2008 and 2018 have also participated in the Asia Cup. So far this tournament has been organized 13 out of 14 times in the ODI format. At the same time, it was organized only once in the T20 format in 2016. This tournament will be organized once again in the UAE in 2022.