India got the advantage of 10-wicket win over England

ICC ODI Team Rankings: India registered a resounding 10-wicket win in the first match of the three-match ODI series against England on Tuesday. The Indian team has taken a 1-0 lead in the series against the British. At the same time, with this victory, Team India has overtaken Pakistan to reach the third place in the ICC ODI team rankings. In this match played at Kennington Oval in London, the Indian team defeated the hosts all four. England were all out on 110 playing first. In reply, India achieved the target without losing any wicket.

If we talk about the rating points of the ranking, before this match, India had 105 points and Pakistan was at the third position with 106 points. But Team India collected three points after this spectacular victory and pushed Pakistan to fourth place with 108 points. At the same time, the losing world champion England team is in second place with 122 points. New Zealand occupy the top position in the ODI team rankings with 126 points. 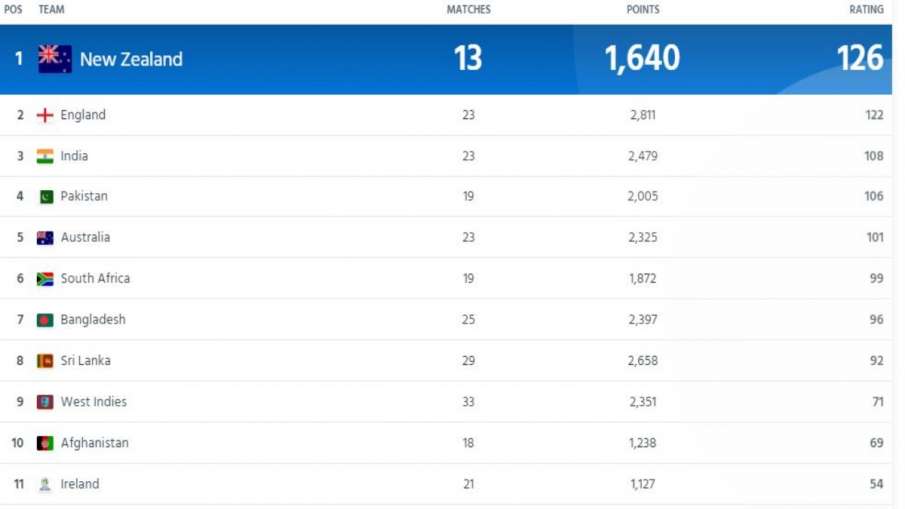 India will have to win the remaining matches

Last month, Pakistan had a clean sweep against the West Indies and Australia were defeated by Sri Lanka. Due to this, Pakistan had reached number three. But now India has snatched this place from him within a few days. Now if India wins both the remaining matches or even one match, then this position will become stronger. On the other hand, if the Indian team loses in the remaining two matches of the series, then Pakistan will again reach the third place.

It is worth noting that after England, India has to play a three-match ODI series against the West Indies under the captaincy of Shikhar Dhawan. After this the team will play the Asia Cup in T20 format and then the Australian team will visit India. After this, the T20 World Cup will be held in Australia in October-November. Then the team has to tour New Zealand and Bangladesh. Team India will play continuously this year and the upcoming tour of West Indies and Zimbabwe can see further improvement in the team’s ranking.

IND vs ENG: Rohit-Dhawan duo made this record their name